Everyone is always chiding me about pictures, well, here, finally, are some pictures. I spent the 24th of December climbing up Mt. Hood with 5 others on a Mazama club climb. Unlike the summer climbs, we could do this during the day, as the temperature didn't promise to get so high as to create ice and rock fall near the very top of the mountain. So, instead, I woke up at 2am, to get to the meeting place in Portland at 4am, and we wound up starting up the mountain around 7am with a wonderful sunrise and a view of all of the southern Cascade mountains and the fog/cloud covered Willamette Valley.

One of the guys, Larry, had a camera, and, unlike me, he used his. These are his pictures I'm sharing (and he did give me the megabyte-sized originals in case someone wants more detail).

I put this one here for perspective in the later pictures. Here we are, nearly at the start of our journey: (click on any of these pictures for the large image, particularly important on the 2nd picture) 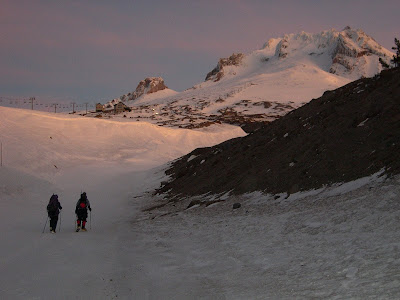 That's me on the left, and our leader on the right. Note the ski lift on our left that heads up the mountain.

Now, we're on the famed "Hogsback" - a gentle slope on which we stopped for a rest and roped up. Our leader secured us by placing ice screws into the ice under the snow, so that should any of us fall, and we not be able to self arrest, the screw would save us. . . I'm the 4th person that you can see from the top of the mountain. The top two climbers are not part of our climbing party (there were other people on the mountain that day, yes!). As Larry noted, it looks as though we have a simple jaunt in the park ahead of us. This is the most dangerous part of the mountain, and where most of the deaths occur, especially in May, the most popular time to climb the mountain. There is a crevasse about where the guy behind me (lower on the mountain) is located. It was apparently open, but I managed to walk right by it and not notice. . . (there were so many other things to look at! Like where I was putting my feet!)

Close up, all these snowy iced rock surfaces didn't look so snowy, but more icy, and the blue shone through. It was absolutely exquisite. 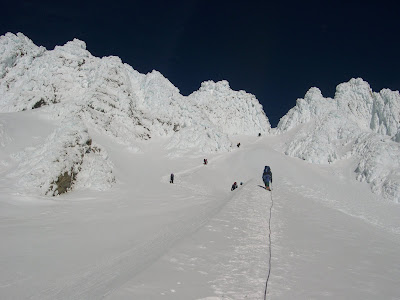 Now, here, we were maybe 1/2 the way up to the summit from the Hogsback. You can tell that it looks just a tad steeper than it did in the previous picture (and much more like it looked to us!). There is the gentle Hogsback below between what we are climbing and the central big protrusion called Crater Rock (center right of the picture). Ok, so can you see the little dot of a climber on the side of that? Right in the middle of the picture? And, now, look straight down from that climber to the ski lift that I was pointing out in the first picture. Somehow, the top of the mountain looks closer to me from the bottom of the mountain, then the bottom looks to me from the top. . . 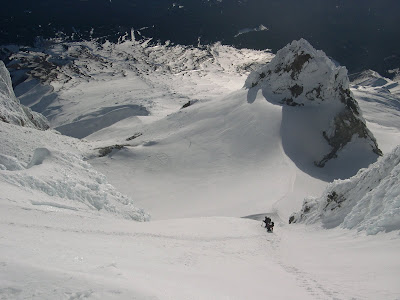 (I'm putting the picture, again, with the lone climber and the ski lift circled.) 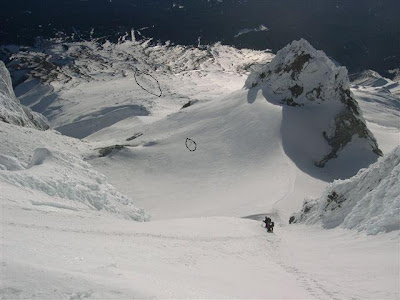 And here is the glorious sunset that we saw on the way down (you can also see the fog-filled Willamette Valley, where Portland is): 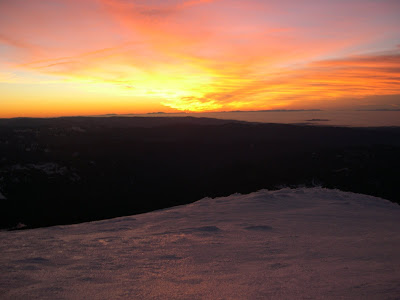 And, in the East, we had the moonrise over the mountain, competing for our attention: 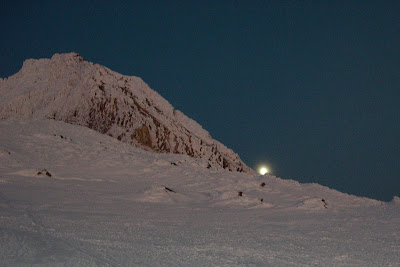 We spent about 11 hours in total on the mountain. And, no, we definitely didn't break any records at this pace - many do it in far less time. . .

Oh, and people were asking me how many times I've climbed it. This was at least my 5th successful climb of Mt. Hood.

leora
P.S. I'm indebted to Larry Martin of our climb party for the pictures.