One of the interesting things about going to high altitudes is the effect on the boiling point of water. While on Aconcagua, at our highest camp, which was at 19,520ft/5950m, I had boiled some water for dinner. I was about to pour it into one of the liter Nalgene bottles that we used for storing and drinking water. Just as I started to pour the water, it became clear that I was going to spill it over my left hand that was holding the bottle, and Aaron sarted saying "WATCH OUT!". Too late! I poured it over my hand, anyway. And kept pouring. I barely noticed! Down at sea level, I would have burned myself for sure! Aaron was surprised. We were in a low pressure weather system, in addition to being at the high altitude, and together, I suspect that the water was boiling at somewhere around 180F/82C, which I would have thought would have been enough to burn, since the "Instahot" faucets, at 190F seem enough to scald. It may also be that since the weather was so chilly (at most, 30F/-1C), that it also helped cool the water as I poured it, bringing the water temperature down even further before it splashed over my hand.

The other aspect of the lowered boiling temperature (and cold weather), was that we couldn't get our freeze-dried food to rehydrate very well. I would have ramen noodles mixed with bulgar wheat, coucous, or pressed rice (all of which do hydrate well, even in cold water!) plus some freeze-dried corn and peas. I'd pour the boiling water into my container that had all of the food in it, cover it (I used a Glad "disposable" food storage container), and let it sit for many, many minutes. The noodles and grain would hydrate and soften, but the peas and corn would always seem crunchy, no matter how long I had them soak. . . Similarly, Wim and Aaron noticed that the higher we got, their pre-packaged freeze-dried meals would become less and less "cooked". . .

This all makes me want to experiment with a microwave - would it work as well at altitude as it does at sea level? Would we be able to superheat water up high, as we can at sea level? Would super-heated water make it so that we could rehydrate all of those freeze-dried foods?

Given the hardware that we were already seeing at basecamp: internet, satellite phones, I suspect that microwaves will start appearing soon, and then all these pressing questions could be answered!
Posted by leora at 1:31 AM No comments:

For the last week and a half, I've been in Colorado, and last week, I was in Ouray, Colorado, ice climbing. I did this a couple of years ago, when I first started ice climbing. Fortunately, I've improved since then, and, improved in this last week of ice climbing. I find it sort of ironic that I have to have others tell me the same thing that I tell others when they are ice climbing. What I looked forward to in this last week of climbing was improving on vertical ice. After someone told me that I wasn't actually depending upon my feet as I should be, I did a lot better, and my arms became a lot less tired when climbing, and I then fell less frequently on vertical ice (before, as long as it wasn't vertical, I would do the right thing, but when it became vertical, I'd apparently panic. . .).

On my third day there, a friend had a camera and took some photos.

In this picture, I'm already about a third of the way up the route. My belayer (person protecting me from falling), is at the top of the route, out of sight, and the rope is going from his belay device down to my harness. He lowered me down the route, and then I started climbing up it. If I were to fall, then I would fall at most a foot or so due to the stretch in the rope (so, it's pretty darned safe!). I'm wearing a yellow jacket and orange helmet. Unfortunately, you can see neither the top nor the bottom of this route in this picture: 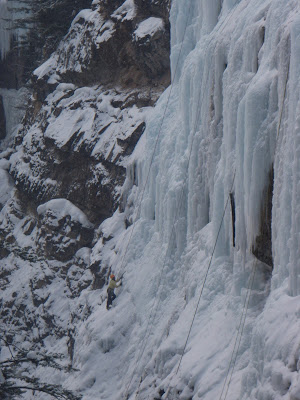 (For those who are familiar with the routes, this was called "The Plunger" in the "Shithouse Wall" section - according to the map, it was a WI4.)

In the below picture, I am looking at a vertical section, wondering how in the heck I'm going to get up it: 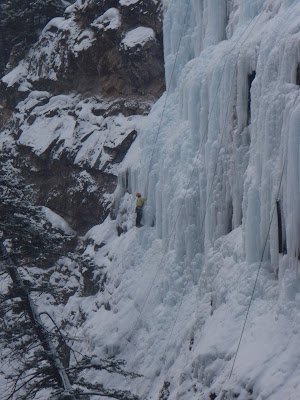 And in this next picture, I've succeeded climbing that vertical section, and just have a few more verticals to go before topping out. Right about this time, my hands started killing me, they were so cold, so just a few feet up from where I am in this picture, I found a good place to stand and warmed up my hands, as it was a bitterly cold day - I think that it was around 16F (-9C): 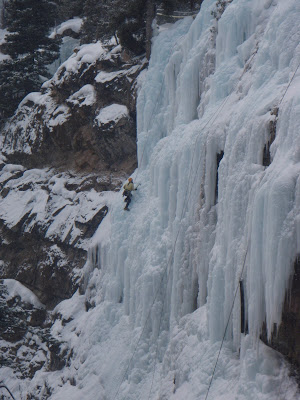 In the above 3 pictures, you can see the ropes that others have strung up for some of the other routes in this area. Fortunately, no one was climbing near me, so I didn't have to worry too much about ice from them falling on me, or ice that I knocked down, falling on someone else. Unfortunately, my belayer didn't have the same luck when he climbed the same route right after me, as there was someone practicing lead climbing (this means that the person doesn't have as much protection as someone who is top-roped, as I was, so if they get hit with ice, and it causes them to fall, they could be gravely injured) next to him, so he had to be extra careful not to knock down ice, lest it fall on that person. Since we have to kick at the ice to get footholds, and whack at the ice with our ice tools for handholds, not having ice fall down is pretty difficult. . .

In this next picture, I've topped out, quite happy at the success, with my belayer, in the lower right of the picture, sharing the happiness: 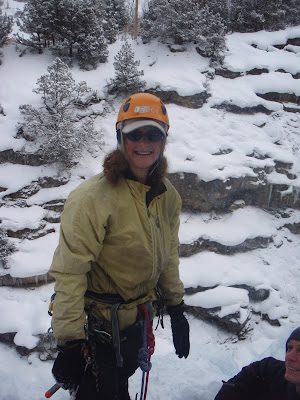 The three of us only did this one route that particular day. I did many more with others over the course of the week, but. . . no pictures!

On my last day, during the afternoon, I wound up being by myself, so I practiced a technique that we use to get multiple people up a rope that is fixed at the top of a route (prussik on a rope) which most of the other climbers (including the guides) in the area hadn't considered, so they were curious as to what I was doing. This made for some interesting exchanges of various techniques, making a nice end to a week full of practice and learning. . .