One of my life's goals is to fill out my birthday calendar, completely. However, I'm not very good at asking people what their birthday's are, so this is a difficult goal, but it is my goal, none the less. So, I thought that maybe I could do it a different way - advertise what entries I still have left to fill, and, have you tell me if you can help me fill it. I have some rules about this. I don't want to fill it with random names. I want it to be filled with names of people *I* know.

Let me know if you can help me out! (I will revise this as I fill out the dates.)

We've had a big fire on Mt. Hood that has closed a campground on the north side. This has been troublesome as the north side is where Eliot Glacier is, where we typically do our ice climbing class field sessions, and the campground provides us easy access to that glacier. I decided to look for an alternate route to the Eliot, since even if we had to walk a long way, it was better, in my view, than the alternative, which was a long drive out to Mt. Adams followed by a long hike out to camp, and then a long hike from there to the Adams Glacier where we could do our ice climbing.

I knew that there was a Canyon on the west side of Mt. Hood, and I thought that maybe I could walk up that canyon, meet the "around the mountain" trail, and from there, get to the glacier. I knew that this canyon existed, since I'd skied (poorly) in it during the winter, and lost my crampons somewhere during that day of skiing. This meant that I could look for the crampons (a long shot), and see if a route to the Eliot were feasible, with one trip.

On my way to the mountain, I saw an almost space-ship looking lenticular cloud over Mt. Hood: 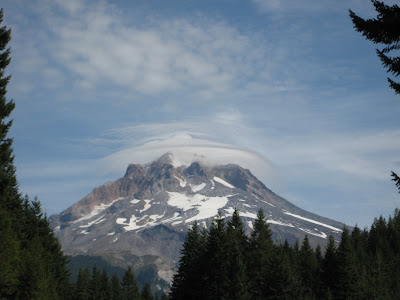 I pressed on to Heather Canyon and discovered that the parking lot was closed. The ramifications of Heather Canyon being a part of the Meadows ski resort were starting to sink in. Ok, so no parking lot - I parked on the road and walked to the start of what I assumed would be a trail: 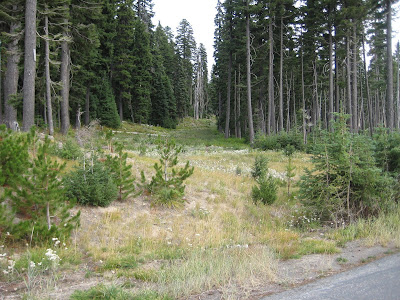 You can see the wide swath of no trees - in the winter, people can ski all the way down to the parking lot, where I stood to take this picture. I assumed that in the summer, there would be a trail. However, I discovered that, well, no, there really isn't a trail. There are places where others (deer and maybe even people) have walked before, but no real trail. The implications of being part of a ski resort sunk in, further. . . No, there wasn't going to be a walking trail, since no one would be here in the summer. There were a lot of cut bushes and trees, to make the wide swath, but I found that that meant that I would trip over the stumps and cut branches. This wasn't looking good as an alternate route to get to the Eliot. I still had to give it a shot to look for my crampons, though, so I pressed on.

Presently, I found myself at a very steep drop-off at the side of a river. I had to cross the river to continue up the canyon. There were some fallen trees, so I found it easy to walk on the trees to the other side of the river. The upstream river snaked along in some thickets, and the place where people skied in the winter was now just a field of boulders: 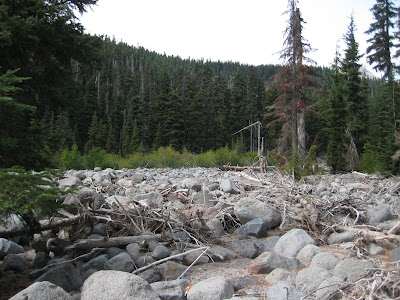 This was slow going, indeed. I'd figured on about 2 hours up the canyon, and 1 to get back down. With no trail, and these boulders, I knew that it would take longer. . . I found that I had to cross the river several times, and sometimes that wasn't so easy. More than once, I was rock hopping to get over to the other side of the river, and decided to turn back and look for another route when I wasn't sure that I could really make it across without slipping or falling in.

In the following picture (the timer mode worked!), I am in the canyon, next to the river, with the upper part of the canyon beyond me (including a waterfall, which you'll see, later), and the top of Mt. Hood in the distance (sort of looks like flat-topped Mt. St. Helens from this angle, doesn't it?): 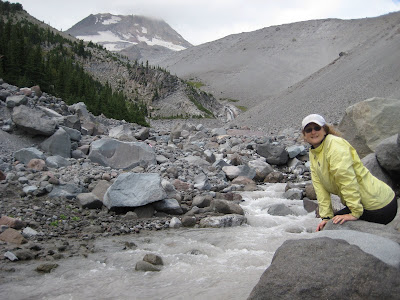 And, here, I've gotten nearer to that waterfall: 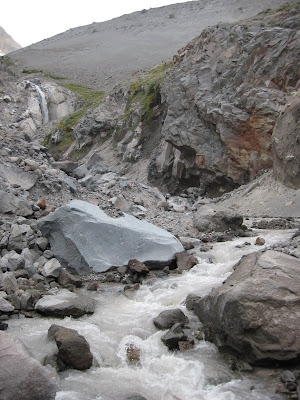 I remembered what it all looked like when snow covered this region and I was "ski-falling" down the canyon (can't call it skiing, exactly, when one is constantly falling down every 30 ft or so. . .). Where the waterfall is, was supposedly the last difficult section before it would be an "easy" ski out. Unfortunately, with my cross country skis, and being very tired by then, that turned out not being so true for me. . .

One last picture of the waterfall, before I climbed up the left bank quite a ways: 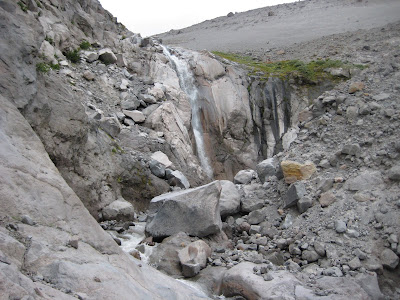 After climbing up that bank maybe 500ft or so, I turned to look back at the canyon and all of the ground that I'd covered, today, and took this picture (the waterfall is not in this picture, as it was down by the river and to the left): 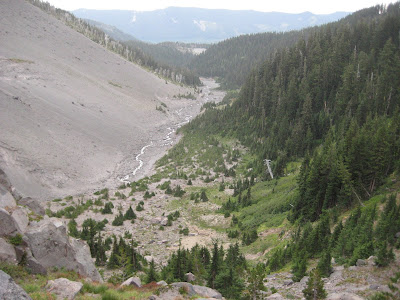 The parking lot, outside of which my car is parked, is visible - if you follow the river as far as you can see it, and keep going straight - beyond a bunch of trees is another gray patch (top center of the picture) - this is the parking lot. It'd taken me a little over 3 hours to get here from there. . . I still wanted to get to the top of the ridge, where my partner at the time of the crampon loss and I sat down and had lunch, so I pushed on. I had a rock wall to negotiate: 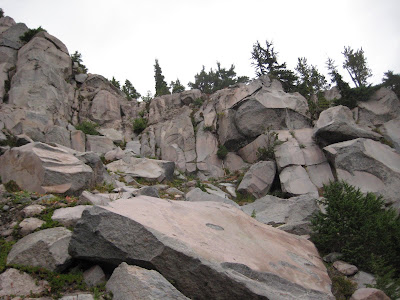 This is a pretty big boulder at the bottom center of the picture, and my route was straight up, such that at the top of the wall, I came out just next to what looks like a tall, perfectly shaped, Christmas tree. From there, I continued up the ridge.

The wind started blowing, and it started to rain. I got to the top of the ridge, looked at the former lunch location, and continued on up as high as we'd gone when we were skiing. I took one last picture of the top of the canyon looking toward the mountain: 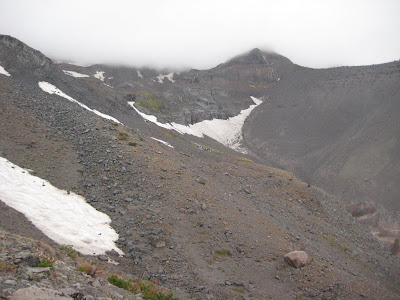 I'm about 1000ft or so higher than the waterfall, which is much further downstream (and not in this picture). The land looks sort of barren, doesn't it? Without snow, it's a different mountain. . .

It'd taken me 4 hours to get here - admittedly, I'd stopped many times to take pictures, and, yes, look for my crampons, and reminisce about what it all looked like with snow on it and with skiers skiing down it, so I didn't exactly push myself, but still, it was twice as long as I'd originally thought that it would take me, so I needed to get a move-on so that I would make it back to my car before dark. I took a slightly different way down to the rock wall, because I was seeing some shiny things here and there, and therefore went to check them out, but they always turned out to be metal signs that were left in various places, and not my crampons. After climbing down the rock wall, I noticed that the area looked like a garden: 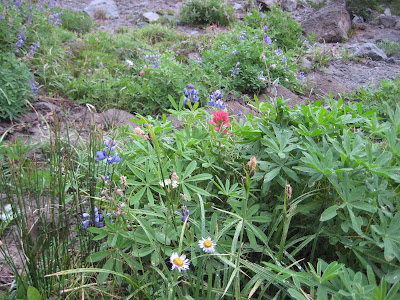 Don't those look like stepping stones? Doesn't this look like someone planted it, and I'm taking a picture in someone's backyard?

After I got down to the river level, and in one of my attempts to avoid a river crossing, I ran across a trail - a real trail. I thought that this would likely lead down Heather Canyon, just on the side, and avoid all of the river crossings. I wasn't exactly correct. It took me into the heart of the ski resort, and I wound up having to bushwhack down the mountainside to get back to the canyon. This took way more time than I would have hoped. I was getting soaked, and it was getting dark. I started to worry a little that I wouldn't notice the path through the trees to the parking lot. I started to think about what I had in the way of bivy (overnight sleeping) gear - which was nothing - so, I really needed to get out of there. I was having to spend a lot of time looking for good river crossings, and I finally realized that I was actually thoroughly wet, now. I mean, I was completely wet, so it didn't really matter if I crossed OVER the river, or went THROUGH the river. I started going through it. I used my trekking poles as stabilizers, and walked directly in the river. This made the crossings much faster and simpler. Eventually, I saw the swath through the trees, and headed for that. I became disoriented when I thought that I was seeing a lake - I hadn't remembered there being any lake. I finally realized that it was just the parking lot, wet from the rain, that I was seeing. And when I got to the parking lot, I could see my white car, a safety beacon, in the distance: 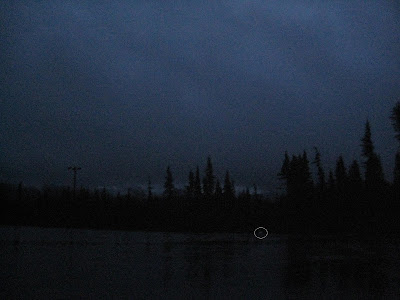 I've circled my car. . . Everything in the foreground was what looked like the lake to me, but, in fact, was the parking lot.

When I got to the car, I stripped completely (no one was anywhere around). I wrung out every piece of clothing, and wrung at least a cup of water out of every piece. Fortunately, I had a change of clothes, which was quite welcome. My 3 hour hike finished 7 hours later. I didn't find my crampons, and didn't find an alternate way to get to the Eliot Glacier, but at least I had my *try* at finding my crampons, and got to see what the Canyon looked like without all of the snow. It was also good to walk someplace like that where there was no trail, and think about what it must have been like for the explorers, years ago. With mountain climbing, we frequently don't have trails, but there is a difference not having trails high on the mountain, and not having trails where there are trees and bushes and undergrowth. It was a good day.