Inside a lenticular cloud

Usually, I've seen lenticular clouds from the ground, looking up at the mountains, and they look like caps, sort of like this classic photo of a lenticular cloud over Mt. Fuji (No, I did NOT take this photo - it was taken from http://pixdaus.com/single.php?id=6528#read_c, where the viewer is invited to copy the image): 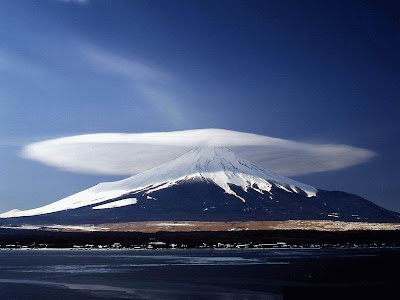 On June 5, when Tom and David and I decided on a mid-week climb of Hood, everything was great. We worried about conditions for a west-side route up Hood, and settled on just doing the south side - maybe going up a more technical route than the standard to make it more interesting. The weather was great all the way up. I took this shot of David, the dawn sky, and Mt. Hood's shadow as we were ascending: [ you can click on any of these, below, to get the original size picture ] 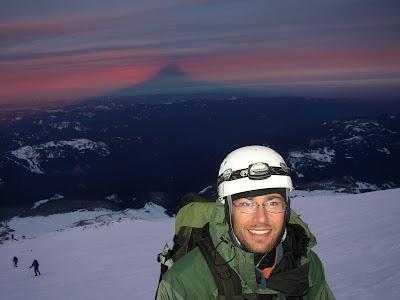 Just as I got into the gully at the top of the Hogsback (our technical route), the wind started howling, and the snow was blowing, and I was having a hard time seeing. I finally noticed that my glasses had frosted up, so I wiped them with my gloves to get rid of the frost, and then could see the route for 10 minutes or so before they'd frost up, again, and I'd have to repeat the process. I really wanted to get up this gully, but I ran into a wall of ice, and since I didn't have two ice tools, AND the ice was bad, AND I'd just been reprimanded for the Devil's Kitchen Headwall climb by one of my mountain rescue buddies, I decided that turning around was the right option. Getting that message down to David at the other end of the rope proved difficult. I yelled my "retreat" message to Tom, who only got it after a break in the wind. He turned around and yelled it down to David. We were only about 60 ft away from each other, so I was about 120 ft away from David. I told them that we should just head over to the parallel gully and summit via that gully, which we knew was a walk-up (well, if you don't mind high-angle snow, it's a walkup, and we don't mind high-angle snow). We all agreed that we'd do that, but by the time I got back down to David and Tom to start over, David had decided that descending was what he wanted to do. Given the visibility: 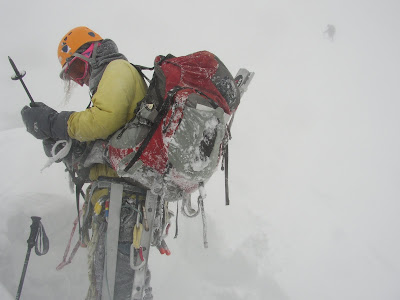 (can you see Tom, about 100ft away, if that, in the upper right of this photo?), we all decided to just turn around and go down. We were here at the saddle of the Hogsback to pick up the gear we'd left there before heading up towards the summit, when David snapped this photo of me covered in rime ice: 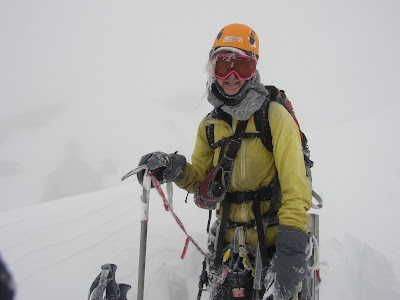 That white blobby thing on the right side of my face is some wisps of my hair that got coated, and that thing around my neck is usually black, as are my pants - but in this and the previous picture they sort of look greyish.

We expected whiteout conditions all the way down, but were surprised after descending a mere 600ft or so to break completely out of the cloud. But, there was something funny about the sky: 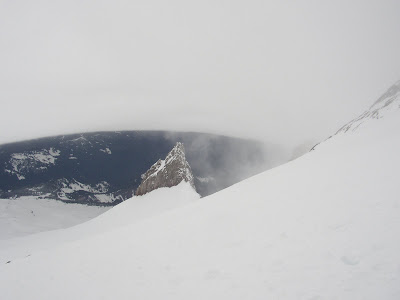 In the center of the photo is Illumination Rock, a nice Rock feature on Hood. We expected to see the rest of the green valley below it, but could only see a band of it - the rest was blotted out by that band of white. The bottom of it was so perfectly smooth. We finally realized that it was the bottom of a lenticular cloud, and we were in it, and were experiencing the winds/weather that everyone always tells us lie beneath those clouds and why most climbers shy away from peaks with lenticular clouds over them, fearing bad weather. We were well prepared for the weather, so didn't mind at all, and, in fact, after seeing this cloud, and features like this little wispy thing: 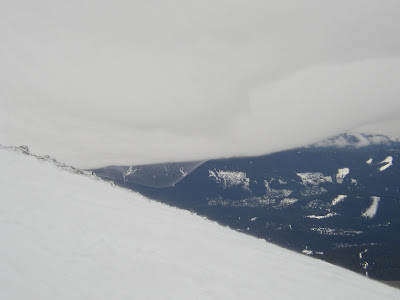 that sort of looks like a jellyfish coming out of the sky, we were absolutely delighted to have been up in the cloud and coming down out of it. David had a smile on his face the whole way down!

It was also interesting that David was all hoarse with a cold when we arrived at his place and carpooled over to Mt. Hood, but on the way back, he was all well - cold all gone. I usually run to get rid of an oncoming cold. Now, it seems, I could also go for a climb. . .