Every weekend after the 4th of July (US Independence Day) for the last 3 years, I've joined my friend Jae and 4 or 5 others to climb the Kautz Glacier route on Mt. Rainier. The first two years, something happened to thwart our being totally successful (although both times, we were able to say that we'd done the crux of the climb!). This year, we were finally successful mounting this 14,410ft giant via this route depicted here: 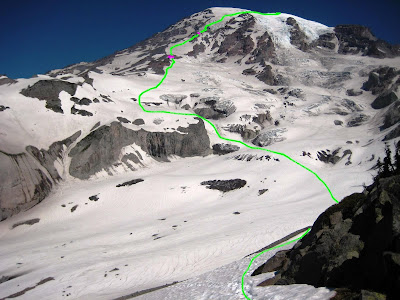 Green is the route, and pink are the camp sites.

We started up slow and easy - crossing the lower Nisqually Glacier the first day, and camping at something like 9600ft. I made some comment to Jae that we were lucky - no wind. He said something to indicate that by saying this, I was inviting the wind. I agreed, out loud, and thought "silly Jae" to myself. . . Here is the team at our first camp: 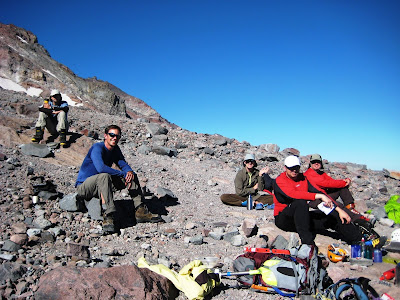 The second day we broke camp, planning to ascend a mere 2000ft, but didn't even do that! We found a nice campsite just about 1200ft up, water was abundant, and those who were carrying the heavier packs voted to ditch all of the heavy gear, here, and do the rest of the climbing on the summit day, with our lighter summit packs (because we would leave all non-essentials at the camp).

On our summit day, which was just later in this same day, from our high camp at 10,800ft, to make absolutely certain that we made it, we started up early - a little before 9pm, expecting to lose hours getting everyone up the crux of the climb (an ice climb) and then allowing plenty of time to negotiate the crevasses on the way to the summit, expecting to arrive around 10am the following day (beat that by about 3 hours). Coming down would take fewer hours, and we hoped to be back at camp at least by 2pm, avoiding the snow getting too soft underneath us, so that it would be less likely that we'd fall into a crevasse, or that the Kautz Glacier would calve off, burying us in avalanche debris. (The previous weekend, a fellow had to be rescued off of this route because he fell into a crevasse, injurying himself, and a couple days after we went through, a piece of the glacier did calve off, and sent tons of ice and snow careening over some of our route.)

The climb was pretty much 5 phases:

We tried to make all of the technical parts as efficient as possible. I headed up and set up the rappel station. Jae and Dan rapped down, first, so that they could set up for the ice climb as soon as they got to the base of the ice climb. Unfortunately, not thinking ahead, I did a standard two rope rappel - where the middle of the rope is at the anchor. However, the rap was just about 20 ft, so when I was done, and had to pull the rope, I had to pull 30 meters (roughly 90 feet) of rope through the device holding the rope at the anchor. Given that my upper body strength is not the best, and we cleverly strengthened the rappel by having the rope go through two biners, not just one, it took me ages to get the rope pulled through. The guys called to me just as I'd finished dumping the rope into my pack, wondering where in the heck I was. . . Jae and Dan moved on to the base of the ice, David and Steve waited for Tom and me to catch up, since there was a little bit of crevasse negotiating that had to be done, where they were waiting, and so they wanted to make sure that we managed it without incident. Then we all high-tailed it to the base of the ice, by which time, Jae and Dan were already set with belay anchor in place. This is the wait and freeze part of the climb, while the lead goes up and puts in protection, mostly to protect himself, until he gets to a "belay station" when he puts in an anchor. Here we are, enjoying this part of the climb: 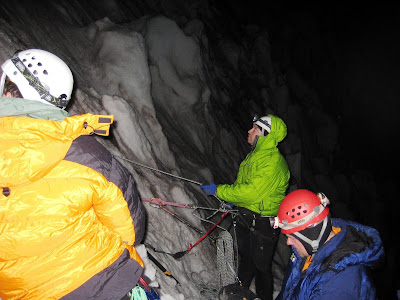 Jae's at the anchor belaying Dan, above (and out of sight of this picture). Steve (in blue) and David (in orange) are getting everything ready for the next part. Everyone has their parkas on because it is so cold, and we're pretty much just standing around. As soon as they started up to climb, they dumped the parkas into their packs.

After getting through this part, we started the long slog across the top to the crater rim. There were seracs and crevasses, and we were moving in the dark. For some reason, Jae didn't want to lose any of us, so he was constantly making sure that the snow under our feet was solid. We didn't have previous tracks to follow - tends to make the climbs a LOT faster if you can blindly follow someone else's tracks - but what's the fun in THAT? After an hour or so, the wind picked up, and we all donned our parkas, again. I had to stop our rope team, once, to pee. This is the one time, while climbing, that I envy the guys. My harness has a little thing that allows me to stay in the harness, and just make it so that I can drop my pants, but I had some 4 layers of pants on - shorts, tights, long underwear, and windpants. That's a lot of clothing to strip down, do my thing, and then get pulled up, and, oh, yeah, it's cold and the wind is blowing. . . I think that my ropemates (Dan and David) asked me if I were ready twice before I was. . . After all, it doesn't take THEM that long. . .

At sunrise, we walked next to a beautiful serac, across a narrow bridge between a couple of crevasses, with a sort of bowl on one side. I didn't think that the picture would come out, given the light, and we were trying to press to get to the summit, so I didn't stop to take a picture, unfortunately.

Finally, at around 6:45 am, we were at the summit! The wind was unbelievable. The rope between us didn't lie on the ground - it was picked up by the wind and floated in the air.My camera decided to stop working (too cold, I'm sure), so the only picture is from Dan's camera. It's hard to tell that the wind is blowing as hard as I know that it was: 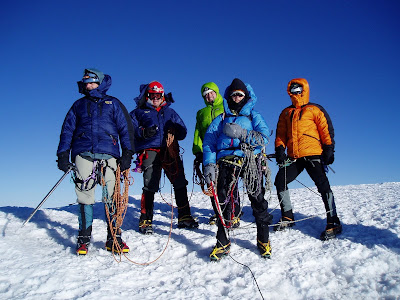 This one has (left to right) Tom, Steve, Jae, me, and David. We joke about all summit pictures looking the same - Is that REALLY David? He is completely covered from head to toe - it could be ANYONE. . .

We stayed just under the summit (out of the wind) for a little over one hour, getting a little bit of needed rest before heading down, and then were back at our camp around 2 or 2:30 in the afternoon. The wind had been just as intense down there - my tent had moved over a couple of inches, and everything inside was all jumbled about. We were told that the nice skiers that we'd seen, earlier, had retied down David's tent, or else he might have lost it, completely. I'd left my stove out, and while it and the pot were still there, the aluminum wind screen that had been around it was gone. We settled down for the night with calmer winds. The calmer winds didn't last very long, however. I went around and re-secured the tent, putting in heavier rocks, and went inside to try to sleep. The flapping of the tent was incessant. Jae can sleep with ear plugs, and so slept through it all. He slept all the way up until the wind picked up the tent, AND me, and threw me into him. That woke him up. After one more bodyslam into Jae, I braved the wind, determined to fix the tent. One of the tiedowns was severed, and the other two were very loose, the rocks not being a match for the wind. I took some of the rope that we use for creating anchors (cordelette), and tied the tent down with that. THAT worked. No more body slams after that. Still lots of tent flapping, but the tent stayed put. The wind, obviously, was someone's revenge for my thinking "silly Jae," earlier. . .

In the morning I went out to see if I could spot my stove windscreen, get water, and go for a pee, wanting to get out of sight of everyone, for a change. . . I was wandering around on some snow and rocks when my foot slipped, and I fell, crashing my lower back onto a rock. I rolled up into a little ball while the pain washed over me, and then spent some time evaluating - one scraped hand (of no consequence), one very sore back. Ooo - this could make things unpleasant. Everything seemed to function, though, so I was sure that I could get down just fine. Walking back to camp made me wonder, slightly, as lifting my legs turned out to be not so easy. Moving downward and walking on flat ground seemed to be ok, so again, I was pretty sure I'd be ok. I told Jae of my plight and he made the normal "so we don't have to call in a helicopter" joke. Eegads - being injured is bad enough - to have to be rescued - that would be incredibly embarrassing!

We'd planned on heading down around 10am in the morning, but Jae noticed that a lenticular cloud: 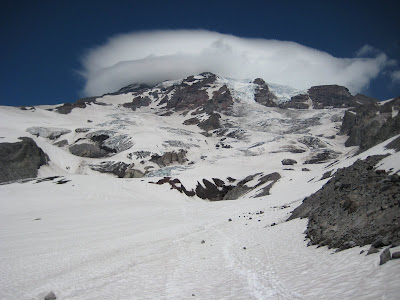 that was around the summit was widening its reach, and Jae didn't want to be in it. He wanted me to break down camp, quickly, which isn't my strong suit. . . Getting everything to fit in the backpack takes time, and it's nice if one can spread out all of the gear, and place it into the pack in exactly the right order. Then, it all fits. But with the wind, this type of packing wasn't possible. I had to make it fit, even though everything would be in the wrong order. I wore my harness so that I wouldn't have to pack it.

We headed down, and I found that pretty much every step hurt, but quite bearable. At one point, we had to jump from a rock over a mote to the snow. Jae, in a supreme moment of compassion, waited for me to help me over. He and David each took one of my hands (as if helping a lady out of a car) and I braced for the pain that would accompany my landing on the snow. I was ecstatic to experience no pain at all. I remembered that moment every time I crossed a crevasse with no help and the pain would cause me to utter "ouch". I was glad that everyone was far away so that they wouldn't hear that constant utterance.

We all made it down just fine, but, annoyingly, the back injury has already kept me off 2 planned climbs. I find that I can run and walk, but straightening up after bending down is, well, a pain in the back. . .

Ok - now for some mountain humor. We use something called a "blue bag" to carry out our excrement (the stuff doesn't disappear in the alpine environment, so for years, now, bagging it up and carrying it out has been standard procedure). The bag looks like this (unfilled): 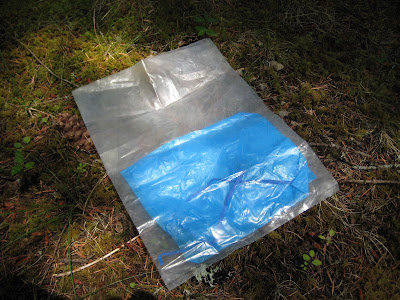 When I pulled the following out of my backpack, Jae thought that he was looking at the biggest filled blue bag he'd ever seen, and was especially surprised because this was the first day of the trip: 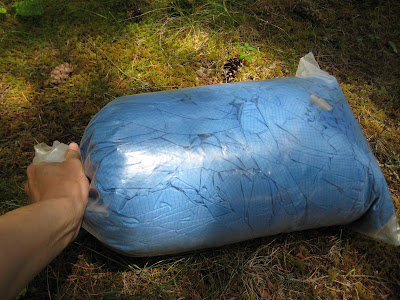 But no - it was just my nice blue parka that I'd elected to shove into a plastic bag, since I didn't have enough stuff sacks!

Here's hoping that you're healthy, warm, and UNINJURED. . .