One of the guys at work, Matt, was having a devil of a time trying to get an opportunity to climb our local, highest mountain in Oregon, Mt. Hood. He took the local mountaineering group’s basic mountaineering class (something I’ve helped to teach in the past), and signed up for a climb. I was going up every weekend to either climb or teach, and he was maybe climbing to the top of the Palmer snowfield (which is really the start of the significant climbing of Mt. Hood), and turning around and going home, or his climb was being cancelled for one reason or another before even getting to the mountain. 2 weekends ago, I was trying to get someone to climb a technical route with me, and failed, so I asked Matt if he wanted to accompany me for a south side ascent (the most climbed route). He jumped at it. We had great weather, including high clouds that kept the sun off of the top of the mountain until we could get up there, thus avoiding the dangers of ice falling down onto us.

Here are a couple of shots of the sunrise: 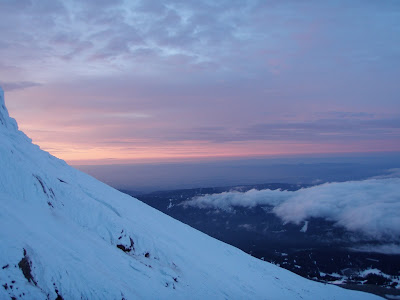 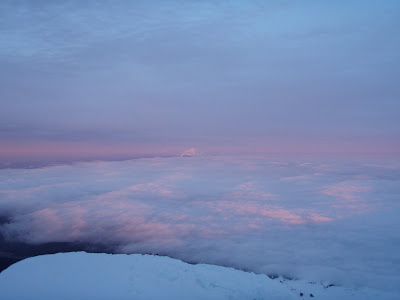 That’s Mt. Jefferson peaking out through the cloud mass that the sun is lighting up.

We were successful and had just stunning views of all of the surrounding mountains, and the cloud shrouded valleys, below. We headed down, and got to a safe spot, the Hogsback. Matt was telling me how beat he was. He ate, and I suggested that perhaps a snooze was in order, as soon as we got to the base of Crater Rock, out of the way of any possible avalanche, ice, or rockfall danger, since the sun was blazing at this point. We went down to the base, and tried to snooze for about an hour. We then headed down, with Matt telling me that he was having a splitting headache, and no amount of water seemed to get rid of it. As we got down to the top of Palmer, with 2 miles and about 2,200ft in elevation still to go, he told me that a migraine was coming on, and that he wanted to put a wet towel on his head and sleep in the dark, but all we had was bright sunshine and a ways to go. I started to wonder if there was *anything* that I could do to help him. I realized that I could take his backpack, and then he would just have to worry about getting his body down. I took his pack, and strapped it on my front. He’s a tall guy, so it stuck up a bit, but wasn’t really much of a problem – with all of the water he’d drunk, it was pretty light. We kept going down. With a little over a mile to go, and still another 1000ft left to drop, we came across two guys taking a lot of pictures. One of them turned to us with that “can you take a picture for us” look in his eyes and he may even have asked it, aloud, and I answered him, that of course I’d be happy to do so. I took their picture with the top of the mountain behind them. They started asking questions about what we’d done, and I was answering. Matt was suffering. We turned around to go down, as did they, but they were still behind us. I decided that I wanted to know where they were from, since they’d been speaking another language when we’d approached, and were obviously tourists. I yelled back the question about where they were from, and they called back “Israel.” I’ve been there, years ago, and despite having relatives there, which should make it more attractive to me, just didn’t care for the heat. Just like Florida, I have a hard time returning, and have yet to. I told them about that, and then mentioned that we have a team of Israelis whom we work with at my company. I so rarely mention what company I work for. I don’t know why – perhaps because many people, in places I’ve visited, give me a blank stare when I do . . . This time, I thought, let me just mention the company. I told them that I work for Intel. They both piped up, “me too!”

We started chatting about all of the people we know, quickly establishing that we knew some of the same people. And, finally, we got around to exchanging our own names. One of the guys, Muhammad, offered to reduce my burden by taking Matt’s backpack from me. He was happy, because he felt like a mountaineer, and I was happy, because it was easier to see without it. As we continued down, I started thinking about the ride home. I’d not gotten any sleep the prior night. I’d woken up at around 6am on Friday, worked all day, and tried to sleep at a colleague’s place, but was never successful before having to pick up Matt at 10pm, and starting our climb at midnight. At this point, it was nearly 3pm the next day, so I’d had 33 hours of no sleep. I told Matt that I was sorry, but I would have to sleep some before I would be able to drive home, so his agony would continue, since for sure, he was not able to drive. Steed, the other Israeli, piped up that he and Muhammad could help drive. At first, I thought that this sounded impossible, but then I realized that they would have just 1 car between them, and could split up, with one driving me, and the other Matt, since likely, they would be staying somewhere on my way home. I asked if they could drive a manual transmission. Of course, they could – they didn’t grow up in the US, where automatic transmissions are the norm!

So, when we got to the parking lot, we moved Matt’s stuff into Steed and Muhammad’s car, so that Muhammad could take Matt home, and Steed took over the driving of my car. As I curled up to go to sleep in my car, with Steed driving, I thought of my friend Mary and what she would say to this, “you had a complete stranger drive your car while you slept!!!!! Are you crazy??!?!? “ I told Steed about this thought as I went off to sleep, and his only comment was “I never did show you my badge!” (He was referring to the Intel badge that we all get as proof of our employment.) He dropped himself off at his hotel in Portland, and by then I’d had enough sleep that I could make the 3/4s hour drive back home without incident.

Steed and I wound up going hiking the following day with one of my interns, with Steed driving his rental car. We returned really late, and Steed got tired while driving, so I took the wheel (fortunately, any Intel employee can drive an Intel employee rented vehicle), and as I did so, mentioned that I was happy to be able to repay the favor from the previous day!

Here’s a picture of me from after that hike, with Coldwater Lake behind me, and some of the low mountains north of Mt. St. Helens: 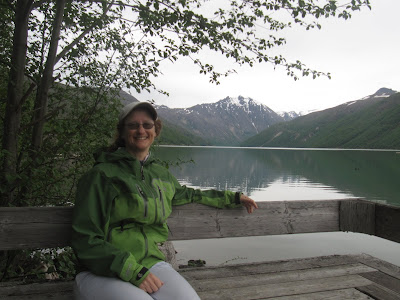 I’m still amazed at how well this all worked out. Oh, and Matt recovered, nicely – just slept the whole way home, and then that night, and felt quite fine, and very happy that he’d climbed his first mountain, and Mt. Hood, at that.

May the universe put out friendly tentacles, at just the right time for you, too.