As I am traveling around New Mexico and Arizona, I was realizing that several of the people I am visiting are former managers!  I was thinking of calling this my “old boss tour,” although some people might interpret “old” the wrong way, so I’m calling them “former” to set the record straight!!!  My first manager at Intel is now living right near Saguaro National Park.  How do I get so lucky?  So, for this morning’s hike, we naturally went to the local hiking area, which is in Saguaro National Park.  I know that the pictures don’t do this park justice, because I was there, and then I looked at my pictures, and I just wasn’t able to achieve showing off the vastness of the Saguaro “forest”.  I did attempt it, however: 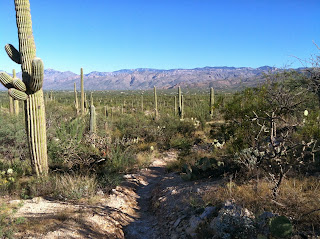 The above shows the path we were on, a nice saguaro in the forefront on the left, and then hundreds of others as far as one can see.  Unfortunately, this one was taken facing to the north west, where a neighborhood butts up against the park, so we also see lots of houses in the distance, before the mountains begin.  I’m hoping that you focus on the vast array of saguaros peaking up, though. . . 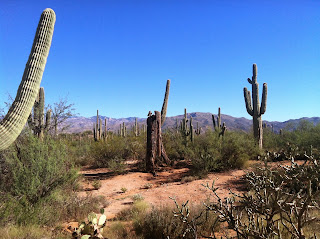 This one shows many elderly saguaros.  I call them elderly, since, I’d heard that they don’t grow branches until they’re at least 40 years old.  I was just reading the brochure from the National Park, though, and it mentions that a saguaro would be about 75 years old when sprouting its first branches!!!!  They are the largest cacti in the United States, with the possibility of attaining 50 ft high!  Some that we could measure were at least 18 feet tall.  I’m sure that there were some that were taller, but it was hard to gauge size.

My fellow saguaros, I beseech you to listen to me: 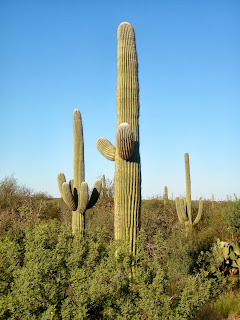 Doesn’t it appear that the center saquaro is having a conversation with the others?

And here, we have an ocotillo on the left, cholla and prickly pear in the foreground, and many saguaro in the background, heading off into the distance: 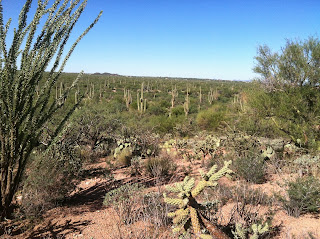 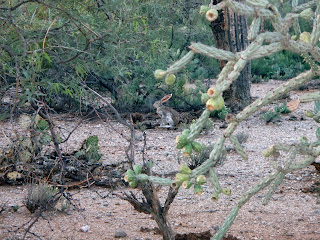 I thought that this was a very majestic sight: 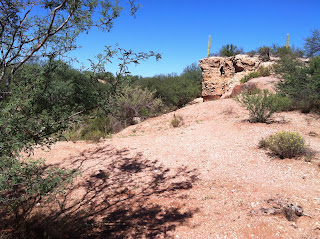 This was taken from a wash (a dry river bed, but where the water flows should it ever decide to rain. . .), looking up at a saguaro that we just felt would topple, one day, when the peninsula of dirt it is standing on breaks away.  We saw a bird dive into the crack that seems to be on its way to getting rather large. . .

The view from my tent 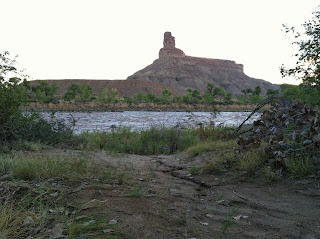 I am so happy that a local in Green River, Utah, told me about this gem.  I'm on my way to see my travel buddy in Ganado, Arizona, and needed a place to stay, tonight (the Pappas family put me up last night in Eagle, Idaho!  I absolutely love my friends - all of them!!!).

It turns out that Green River is famous for its melons, so I purchased a cantaloupe, went to the campground, and wound up sharing the melon with a former trucker, who now just spends his days camping all over the US.

May you always have a good place to rest!