helping another attain a life's goal 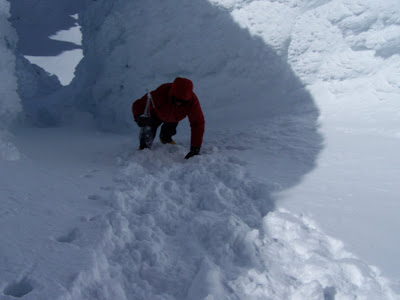 We summitted, and David was thrilled! And I was thrilled to have helped him get there! We still had half the trip, yet, to go - getting up is great, but most of the accidents happen on the way down. We downclimbed through the Chute, to the flat spot. I looked up, saw a huge chunk of ice, just being hit by the morning sun, and dallied no longer, heading down. I didn't hear footsteps behind me, so turned around and saw Duane and David standing there on the flat spot. I yelled to them about my concern about the ice above them - they looked up, and immediately made their way down. David had stopped on the way up in this same spot to take this shot: 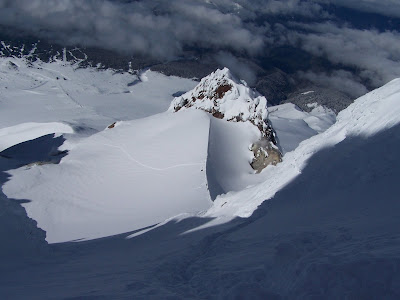 That line of snow in the middle of the photo is the famed Hogsback running right into Crater Rock, with one of the 3 dots along the Hogsback being John, waiting for us. Further down on the left of the photo, you should be able to make out the straight line of the Palmer ski lift. That lift heads down to Timberline lodge, and the Day lodge. We'd a ways to go before we could call the whole thing, successful. And down we went, and successful we were. I was very happy to have been a part of allowing David to meet one of his life's goals. It made me happy to be competent enough at climbing to do such a thing for another. 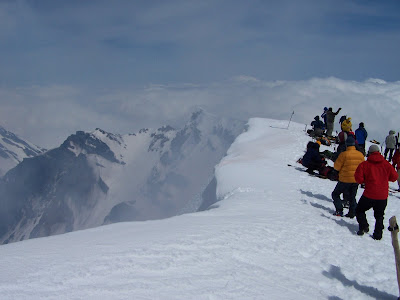 Hi, all - it's been a while since I've written anything, and it's been a pretty good climb season, with a good mix of routes and mountains. I've done the South Side, Leuthold, and Sunshine routes up Mt. Hood, "winter route" climb up Mt. St. Helens, a good attempt on a southern route up Mt. Jefferson, a couple of south side climbs up Mt. Adams, part way up the Kautz Glacier up Rainier (again - one day, I'll get up there. . .), Mt. Baker, and an epic climb up Mt. Shuksan (see Blog for a good writeup on this one by one of our team-mates). I thought I'd mention a few highlights of some of these climbs in various "lore" writings, as well as include a couple of pictures from some of the folks who brought cameras along. I leave the picture taking to these guys/gals who have these cute little digital cameras that they can whip out at a moment's notice. . .

So, the first climb (April 28th, 2007): A friend wanted to do Mt. St. Helens, so we set a date and planned around that - he invited people, I invited people, and then he couldn't join us, but the die was cast. . . One of my friends at work wanted to use it as a "conditioning hike" for our Mt. Hood climb scheduled for the following week. So I brought a rope for him to carry, and pickets and a harness. He was a wimp, however, (ok, not really, but the story sounds better if I say so), and one of the other guys gladly took the rope for the rest of the climb. Mt. St. Helens doesn't require any of this stuff to climb - crampons and an ice axe, in this early spring season are plenty. But since we'd taken all of this, and observed a large cornice with a nice fault line some 10 to 20 feet from the rim when we got up there, we decided to use our equipment to safely peer into the crater. The weather cooperated, although it was socked in when we first got up there, by the time we started checking out the crater, it started to clear up, and so we had great views of the growing dome, and of Rainier, in the distance (with 3 lenticular clouds over it!). After we'd taken our looks and were getting ready to head down, a couple casually walked over to where we'd been peering, without any protection whatsoever. We called over to them, telling them that it wasn't a particularly smart move, given the cornice, and they retorted that "well, someone ELSE was here!" Good candidates for the Darwin Lemming awards, in my book. Do something stupid, because you think that someone else did it. We did inform them that, yeah, that someone had been us, with anchors set and use of a rope in case the cornice decided to give way. . .

Alas, the cameras of my co-climbers were safely in their owners' backpacks when we were all peering into the crater, so I only have this one to prove that we were there, with a shot of Adams in the background. . . You can also see that there *is* a cornice. And yes, there were lots of people up there - something like 127 people had applied for permits for that day - the 100 permits/day hadn't yet gone into affect.

A good start to the season!
Posted by leora at 2:27 PM No comments: