Milestones attained, in spite of struggles 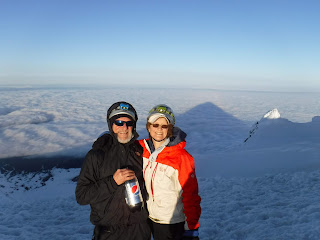 We’re shown above with the shadow of Mt. Hood stretched out on the clouds, below, and the early morning sunshine (barely ½ hour after sunrise) catching one of the outcroppings near the summit.  I love the texture of the clouds, center left of the photo – see that bit of a swirl in there?

Jay is clutching his trademark drink.  If we just go on a one-day climb, there’s always the sound of pssssssssfffffftttttttt, as he opens the bottle in the low pressure atmosphere as we climb higher, which tends to make everyone laugh after they whip their heads around, trying to figure out where that sound is coming from.

So, what’s this about struggles?

After our success on Mauna Kea, marking the end to our 50 state highest points project, we climbed Mauna Loa, also on the Big Island in Hawaii.  On the way down off of Mauna Kea, and then, again, down off of Mauna Loa, I not only suffered from altitude sickness, but my left knee hurt terribly by the end of each climb.  I figured that I’d get it looked into, after I got back home.  Well, the very next hike that we did, now on the island of Kauai, resulted in a slip of some sort on the rain-slicked mud, and me tearing the meniscus of my left knee.  After a torturous 4 hour descent of only 2500ft, and about 2.5 miles, which normally would have taken us less than 2 hours, if that, we made it to the car, but we were unable to do any more climbing or any significant hiking, after that, for the rest of the month that we were in Hawaii.  That meant that the long-planned-for Na Pali coastal hike was out (for which we’d bought a relatively expensive permit), as was all of the other hiking we’d planned or anticipated while there.  We consoled ourselves with snorkeling a good deal, instead, which was also gentle on my knee.

After we returned home, I got the meniscus tear diagnosed and started up on physical therapy.  We then took off on a trip to Germany to visit Jay’s sister and her husband, and took in Iceland using Icelandic Air’s generous no-extra-airfare-fee long lay-overs in Iceland enroute.  And then, after getting home, and both of us dealing with a cold for about 3 weeks, went off on a trip to Michigan, where the flat landscape turned out beneficial for allowing me to finally go on long walks.

I brought with me to Michigan (where my family still resides), a sweater that my immediate family all had acquired some 40 or so years, prior, and we took this photo to celebrate my parents’ 61st wedding anniversary: 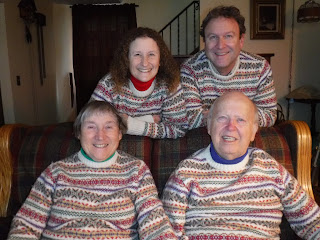 Too bad we never took a similar picture 40 years ago!  That would have been pretty funny!

After returning to Oregon, I finally was able to see an orthopedist, who seemed to think that my time was up – no more backpacking/hiking/climbing  - I needed to think about winding down, he seemed to indicate.  Even though I *knew* that that should not be the outcome, it made me afraid to do more because of either re-injury or worse outcomes.  I kept telling him that’s not an acceptable response to my situation (it turns out that I have some osteoarthritis in my knee), until he eventually offered that an off-loading brace might help me out.  The osteoarthritis is affecting the cartilage in the inside part of my knee, so the brace makes it so that when I walk, the force is transferred to the outside (good) part of my knee.  That seemed to make long, hilly walks doable.  My physical therapist suggested other providers for me to talk to.  I talked to them, and wound up getting a cortisone shot in my knee, which seems to have made some things better.

Jay and I decided that I should try a previously planned climb of Mt. St. Helens.  To reduce the descent, Jay and I packed in and stayed overnight partway up the mountain.  Here’s our mountain home, with the clouds rolling in the background: 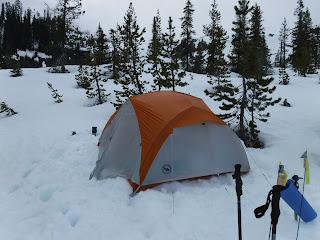 We were joined, the next day, by the rest of the team.  After getting to the summit (Mt. Adams in the distance, and the northeastern part of the St. Helens crater rim, behind us – Photo Credit: Teresa Redman): 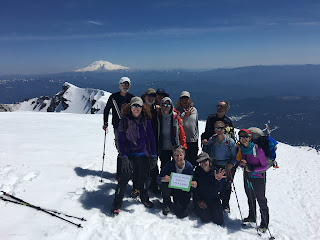 we glissaded (sat on our butts and slid down) a good part of the upper mountain.  But, alas, the snow got so soft, that we would sink into the snow faster than we could slide down it!  So, we had to do a bunch of walking to get back to camp.  I used the brace for the descent, and it seemed effective.

When we got to our camp, it was a mess.  We’d specifically left the tent open, so that if a rodent or creature wanted to get in, they wouldn’t have to chew holes into it.  Well, the ravens tore through it, anyway – pulling a sleeping bag out of one hole that they made, puncturing the air mattress (still working on repairing that!), and taking off with all of Jay’s food (including the freezed dried stuff!).  This meant that we had to pack out that night – thus negating the whole point of packing in – which was to avoid doing the complete descent in one day. . .

Fortunately, my knee stayed relatively happy that whole climb, and the next day, and even the following day, until the end of our daily walk, and then wow-eee!  A new hurt came on strong in a new place.  I could barely walk for several days.  Fortunately, the pain subsided, and I was able to start walking again.  We decided to risk another climb when the weather and conditions appeared to be favorable for the Hood climb.

Again, after getting to the summit, I donned my brace, and headed down.  This climb, however, was more technical, and I had to do a maneuver that I’d not needed to do on any of the previous hikes or climbs, and searing pain ran through the back of my knee.  Here I was, in the crux of the climb, and in a tight spot that everyone going up or down needed to go through, and I just wanted to stop.  I realized that I had to get through it, so, I just cringed and bore it until I got to a flat spot, which fortunately wasn’t too far away.

The brace is bulky, so I can’t just put it on my skin, and put tights, long johns, or even some pants on top of it, I have to put it on top of them, but each bit of apparel is a different thickness, and it turns out that what I wore seemed to be too thick for the current adjustment of the brace, so it was over-correcting.  I decided to take it off before doing the rest of the descent, in hopes that the pain would ease.  It did.  Alas, we were on the mountain so early in the morning, that at that elevation, the snow was quite crusty, so we couldn’t glissade (thus saving my knee) until we got much further down.  I worried that I would pound my knee too much, so I glissaded in spite of the poor conditions, until the lack of steepness forced me to walk, again.  We took it much slower than we normally do, so that the knee wouldn’t be pounding so much.  It must have made a difference, because I didn’t suffer major pain in the following days.

I did, however, talk to my physical therapist, Lynne, who patiently explained what the “new hurt” was that I had experienced a couple of days after the St. Helens descent, and kindly informed me that likely my muscles were not really in condition for climbing.  I went in to see her shortly thereafter, and she confirmed that I wasn’t up to snuff, and has given me a ton of exercises to do to strengthen the muscles that should help to put less strain on my knee.  Oh, for the days when all of this stuff was easy – and just doing what I wanted to do was enough to ready all of my muscles. . .

May your “easy” days last as long as possible. . .