The Good, the Bad, and the Tragic

The good news is that my travel buddy and I are going to celebrate his 11/11/11 birthday by traveling to Antarctica!!! We'll be flying to Buenos Aires, Argentina, and then on to Ushuaia, at the very southern tip of Argentina, where we'll hop on a boat, take off across the dreaded Drake Passage (everyone tells me that it's very rough!), visit a sort of arm of land that projects out from the continent, called the Antarctic Penninsula, do some kayaking, and, if the weather permits, an overnight campout on the continent, a little more kayaking, and then return back to Ushuaia. We'll be on a ship called the One Ocean Navigator (also known as Akademik Ioffe) and get to spend about 6 days wandering around the Antarctic Peninsula.

The bad news is that we've had to postpone the Denali expedition until next year, due to Candi's back injury. She's spending the year getting her back up to snuff. Meanwhile, Tom and David are climbing Denali, now, as I write this, with a guide service. Candi, Oleg, and I are currently planning to climb Denali as a threesome, with which Candi is now comfortable. This makes the planning, skills practicing, communications, and likely the whole climb much simpler. It does narrow the safety margin a bit, so practicing together will become even more critical. We did a navigation practice several weekends ago, climbing Mt. St. Helens in a whiteout, which was really fun. There was only one other team on the mountain. I put some wands in on the way up, and we took compass bearings and made a mental note of the altitude of each wand. There was one wand in particular, in the middle of a vast snowfield, that I never expected to see again, on the way down, because we spaced them so far apart, so that relatively vague readings on the compass would get us near, but perhaps not near enough, in such whiteout conditions, to make out a wand, but we found them all, which was quite gratifying.

Our summit shot gives some indication of the low visibility: 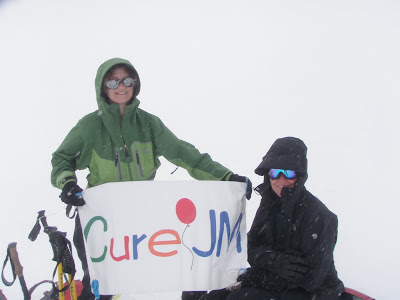 Can you see the edge of the crater rim behind me? I sure can't! And in case you can't tell, I'm the one standing, and Candi is sitting.

Now, compare the above to what it looked like on a clear day, earlier in the year, when I went with my friends Rita and Gil: 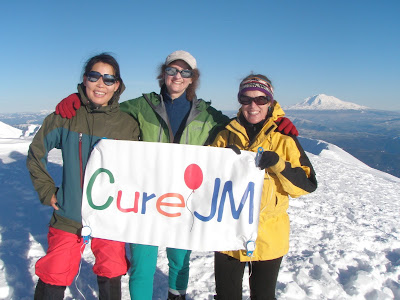 This was taken looking east, where you can see the edge of the rim in the near distance, and Mt. Adams in the far distance. (JM stands for "Juvenile Myositis.")

The tragic news is that my wonderful next door neighbor, Steve Allen, was killed, yesterday, in an explosion of something called an hydraulic accumulator that he was working on at his work place, Stimson Lumber. It was apparently under pressure, when it wasn't expected to be. This was the neighbor of whom I wrote in an earlier leoralore, when I was having my water difficulties. Steve didn't like to hear about my climbing exploits, because they made him too nervous. . . Little did we know, when we discussed my climbing, that his work would wind up being so deadly. He was a truly wonderful man. He touched many lives, and always in such positive ways. It's heart-wrenching to have to talk about him in the past tense.

Please, all - stay healthy and alive.