While we were in nice, cool, Sydney, we discussed our plans of driving north to Darwin with our hosts, Peter and Elizabeth.  While we were having to wear jackets in Sydney, we were checking the weather in Darwin, and it was already getting to be in the 90’s (Fahrenheit) (around 32-ish Celsius).  I remember saying something like, “well, at least we can go for a swim.”  “But you can’t!” exclaimed Elizabeth.  I was confused – why not?  “Because there are crocodiles, there!”

And then, when we got close to Darwin, our Darwin friends, Dennis and Anne, told us about this lovely place, Edith Falls, where one could swim – they remove any crocodiles, periodically, so that people CAN swim.

Here’s a shot of some of the falls in the park, on the trail that we went on to get to the pool just above these falls, to swim: 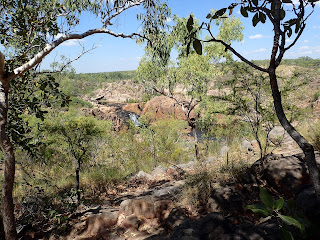 And here’s a shot of the pool that we swam in, with another waterfall behind me and the Cure JM (Juvenile Myositis) banner: 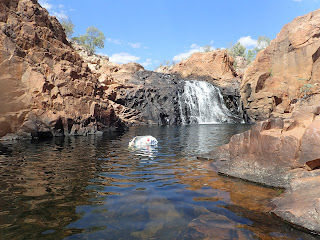 Dennis encouraged us to take a tour to see the crocodiles, even if it’s a bit artificial, as the crocodiles are in the wild, and they are rather spectacular.  Click here to see a 16 second video of a crocodile in action on our little tour on the Adelaide River.  Here are a couple of still shots.  First, the approaching crocodile; note the shape of the head: 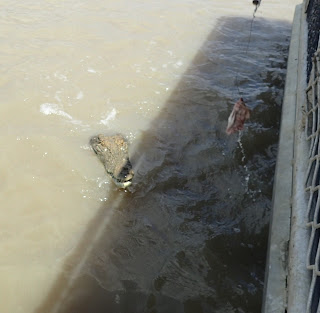 Next, the jump – these guys are amazing – their tails are almost the same length as their bodies, and they use them to launch their bodies out of the water: 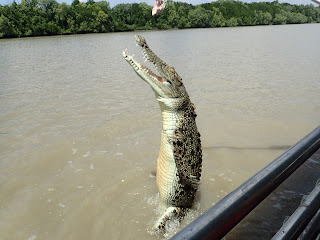 I love that you can see his back legs just at the water level, his left “arm”  with those long sharp claws down by his side as he also uses that to create momentum upward, and, those nice sharp teeth.  This next shot shows what it looks like with his back toward you: 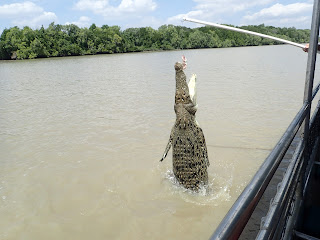 And then this one, with the arm thrust down, and the full set of teeth: 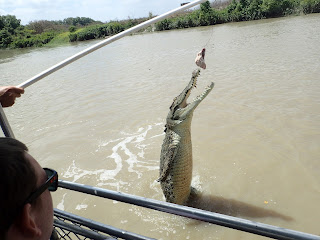 And here’s a close-up of the teeth: 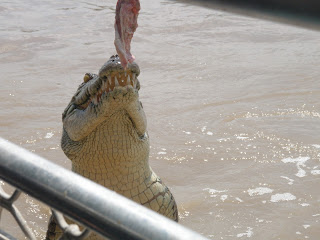 This next guy is much older, and bigger: 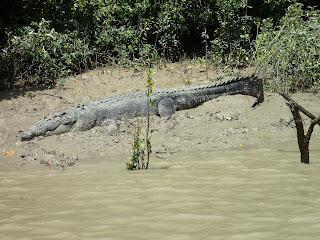 and he doesn’t have much in the way of teeth left: 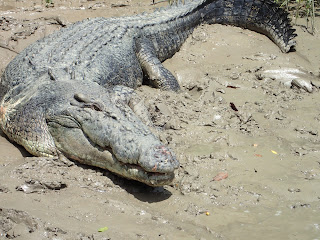 Here’s another beauty on the river shore: 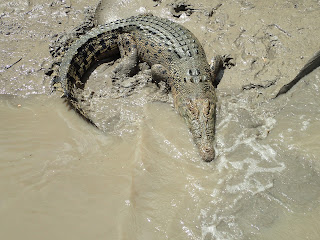 And a close-up of a baby crocodile: 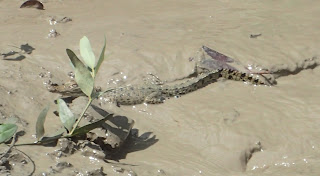 Oh, and while looking at this little guy, there were these other creatures running around in the mud: 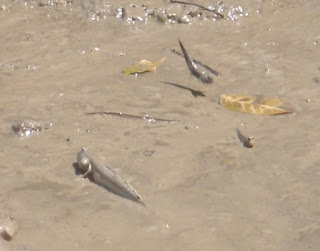 They’re called mudskippers.  There are three of them in the above picture.  The above is a close-up – for size comparison, note the nearby leaf.

So, back to the crocodiles, they are wild, and while they don’t *depend* on these tasty morsels provided by the tour operators, they certainly are encouraged to show themselves and participate in the revelry.

We saw one crocodile, completely in the wild, at this billabong (a pond): 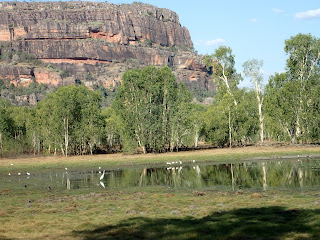 for which there was the following warning: 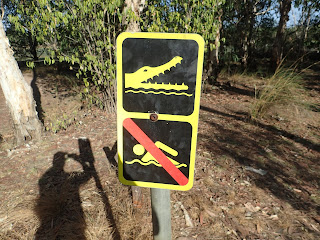 Since we’d seen so many of these signs (pretty much, everywhere where there was water), we may have had a little bit of a casual response to the sign.  We had gone there to check out the gorgeous birds.  We weren’t at the water’s edge, but we were getting somewhat close to it, when all of a sudden, we all spotted a very large crocodile coming our way.  We all decided that we weren’t interested in being lunch for the croc, so moved away, without, I’m sad to say, a picture. . .


So, with these crocodile images firmly in our heads, what better thing to do than to go some place for a swim?  It was, after all, very, very hot, with temperatures at least 95F (35C), and definitely reaching over 100F (38C), frequently.  We decided to do a hike to Jim Jim Falls, which required us to go on a road for 4 wheel drive cars, only.  Some roads specified whether the 4WD had to be high clearance or not.  This one required high clearance during some times of the year.  We thought that we would try it, and were successful in getting to the trailhead for Jim Jim Falls.  At the trailhead, we noticed the following two signs: 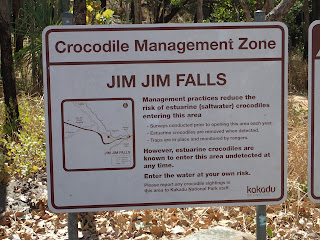 talking about how they manage the crocodiles so that we’ll be safe swimming in the pool at Jim Jim Falls, and: 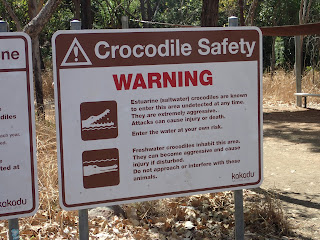 that introduced the concept of two different types of crocodiles, which we only fully understood, later in our trip.

One of the first things we noticed on our hike was a crocodile trap: 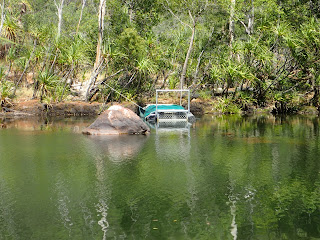 This picture of the trap was on our way out – and it was sprung!  We wondered if a crocodile had, indeed, been caught in it, but we couldn’t tell.

Looking ahead to Jim Jim Falls: 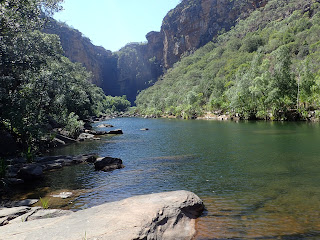 Here’s a shot of where the falls would be if there were falls, from the pool of water in which we were swimming: 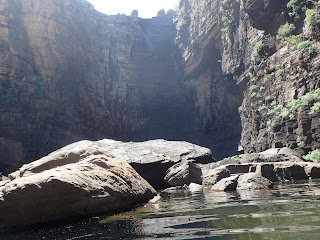 And then, another shot from that same pool, looking back to where we’d hiked n from: 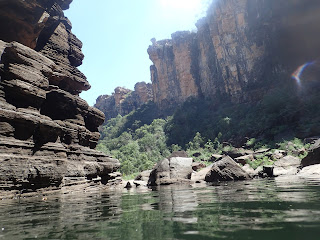 We did a lot of climbing over rocks to get into this pool.  There is a pool with a nice sandy beach on the other side of the rocks just at the end of this pool.   And soon after we arrived, so did several families, some Australian, and one American family doing some travelling similar to ours.  We got some tips for other “must see” places, and headed back.

Dennis and Anne had told us to tour Katherine Gorge, so that was our next day’s stop.  There are several gorges, here, and we didn’t have enough time to go through all 3 gorges, but we were able to do the ½ day kayak through the 1st gorge: 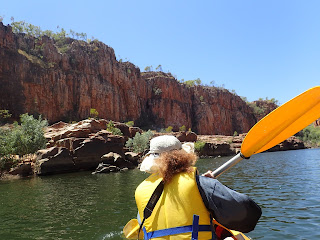 That’s my back.  You might note that I’m wearing a long-sleeved cotton shirt – it was the only way I could be comfortable in the searing sun and heat: I’d soak my shirt and pants, and rewet them when they dried.  The kayak was for a couple of miles, and then we left the kayaks on the shore of the end of the 1st gorge, and then went on a short little hike to the 2nd gorge for a swim: 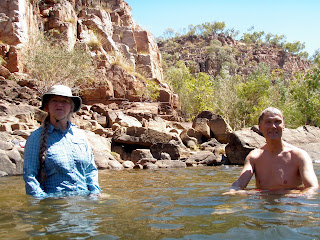 Rebecca and Ed were happily cooling off.
Jay swung around after the above picture, and took a picture of me with the Cure JM banner: 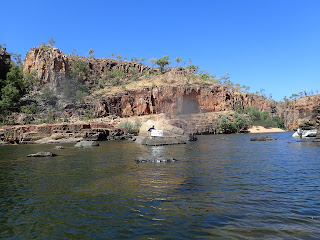 There are several things to note in the above picture.  Firstly, I was swimming in my long sleeves – enjoying being cool, and knowing that my shirt would be dry soon after leaving the water – so why NOT use it for sun protection, as well?  Another thing to note is the silvery boat to the right of the picture.  There were tour boats that were in this 2nd gorge, and while swimming, we had to look out for them. . .  We could have kayaked, further, but just didn’t have the time.  And lastly, do you see that beach-looking thing to the right of the picture?  It is a nice sandy beach, and when Ed and I swam up to it, we discovered that it had a “keep off – crocodile nesting area” sign on it!!!!  Ok, so this beach, that is off of this pool of water that we’re swimming in is a crocodile nesting sight, but this pool is safe to swim in?  The mind is boggled. . .

Here’s another picture looking up the gorge, and you can see that crocodile nesting beach on the left: 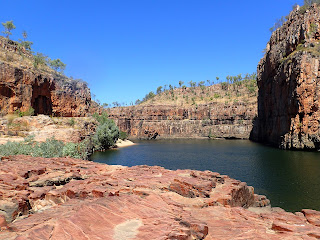 with beautiful red rock under foot. .
From the water, I took the following shot in the other direction: 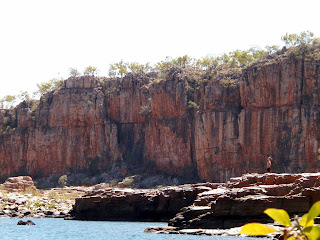 I like the above picture, because it has Jay in it, looking at his surroundings, giving perspective of the size of the surroundings.

Ah, it was beautiful and cooling and pleasant, but we had to move on, so we took the short hike back to the first gorge, and got in the kayaks we’d left on the shore, and kayaked back: 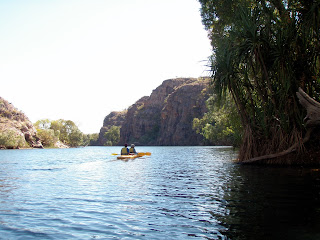 Ed and Rebecca, enjoying the shade, and the current taking them back.

Later, as we drove west, but still in the Australia’s Northern Territory, we stayed in a cabin at a caravan park that pretty much constituted the entire inland town of Timber Creek.  Here, they advertised that every day, they feed the crocodiles, and here, the crocodiles were “freshies” – that is, freshwater crocodiles (the second type that were mentioned on that Jim Jim Falls sign, way above); and that is opposed to the “salties” that were pictured, above, which are salt-water crocodiles.

One of the most noticeable differences is the shape of their heads.  Here’s what the “freshie” head looks like: 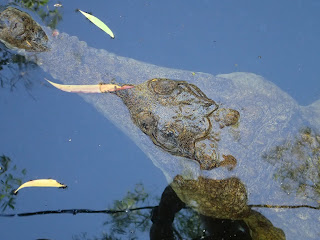 The snout is much narrower than the Saltie’s snout.  One guy claimed that these guys wouldn’t be able to kill us – that if they did grab an arm, they’d break their snout, because it wasn’t as powerful as the Saltie’s snout.  I don’t know about that, but it does jive with that sign that suggests that Salties can maime and kill, but Freshies only maime. . .  However, I’m not sure that I’m going to ever test that theory. . .  Here, at this river, they tempted the freshies with much smaller bits of meat than what we saw used to tempt the salties.

Here’s one freshie making his way over to us: 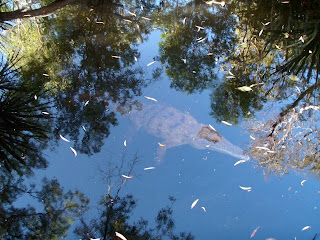 And then another shot of one right next to the bridge where we were all standing, while the one person tempted them with meat: 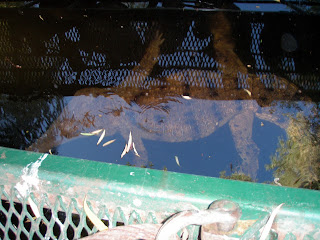 These guys definitely didn’t launch their whole bodies out of the water as the salties did.

And with that, our crocodile adventures ended.

Here’s to enjoying crocodiles from a position of safety!

Leora
Posted by leora at 2:04 PM No comments: