A week has passed since my Dad passed away, and I think that it might be time to admit to myself that he’s gone.   Yes, with my family I wrote an obituary, and emailed it out, and wrote out the details (see below) of the slideshow that my sister-in-law so kindly put together, but stuff like this, I seem to sort of compartmentalize, and I think that by sending this out to you all, it will be a true acknowledgement (emotionally) that he’s no longer here. 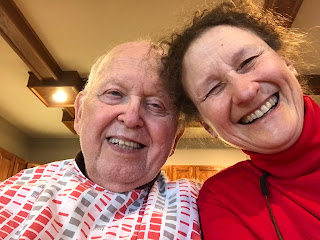 Memories from the far past continually pour into my mind:
Then there are the memories from the not-so-far past:
I also remember that he loaned me his SLR camera, after teaching me how to use it, so that I could take pictures when my girlfriend, Jeannie, and I made a trip to Taiwan to visit her family.  My parents wanted me to take pictures since they knew that they would never go, but were still interested to see what I saw, there.

And then there are the memories of the very, very recent past.  Thankfully, I was in Michigan for the month of February, so I got to see him every day.  Whenever we did a transfer from his wheelchair to anything other than the walker, we got to dance, together – something that my brother had suggested worked really well.  Indeed, it did work well – as we’d rock side to side and I’d “lead” him to the destination.

I think that this may be what memorial services are for – for everyone to get together and go through their memories, and send their loved one on, in their mind, as well as in fact.  However, I’ve always hated memorial services.  Probably because I’m an introvert, and having so many people in one place at one time just saps the energy out of me, even if I really enjoy each individual conversation that I have with everyone.  So maybe it’s fitting that I don’t have to deal with a formal memorial service at this exact time?  Or maybe I’m just searching for that silver lining in what is really a dreadful situation.  I’m very sorry that I can’t be together with my Mom, and help her with the myriad of end of life duties that she’s stuck with.  It’s easier to divvy all of those up if we’re together.  FaceTime is great for “seeing” one another, but we don’t have the remote hug perfected, yet. . .

So Dad, I’m glad that your suffering (from Covid-19) is over, but I’m so sorry that it had to be in this way.  You survived heart attacks and strokes and a cardiac arrest, kidney issues and more, but the virus is the thing that finally took the wind out of you, most literally.  Yes, please, rest in peace.

We do still intend to have a proper memorial service after all of -this- is over.  I know that no one is really totally unaffected by the coronavirus, and many are suffering in unfathomable ways.  Love to all, and virtual hugs to you all.

Here’s the detail of the slideshow.  You can click on the gear (settings) on the lower right hand corner of the video and make it “HD” (for High definition):

and you can go to full screen by clicking on that “expansion” box, right next to it.  (This is in Facebook - you don’t need a Facebook account to see it, but you might need to press “not right now” if it asks you if you want to go to Leslie Gregory’s page.)  The slideshow is also on the FischerFuneral site, as well, but the quality of the one on Facebook is better.

If not specified, below, then the photo contains Ralph, and one or more of: Trudy, Leslie, Leora

The number on the left is the video time marker visible when your mouse hovers over the video timeline. (You can drag the marker to specific positions).
0:33 Ralph & Bob after successfully felling a tree AWAY from their farmhouse.
1:06 Evelyn Raiter’s parents and Trudy and Ralph (in Nebraska)
1:52 Ralph with Evelyn Raiter to his right (folkdancing at Detroit’s Meadowbrook)
2:32 Prometheus & Ralph
2:38 Ralph and his parents (Tillie and Leonard)
2:40 Ralph and Trudy, standing; and down in front: Sherri, Allison, Daniel, Leslie
2:45 Ralph on the roof and Ron (standing on scaffolding)
2:48 Ralph and Orion
2:54 Leslie & Sherri’s wedding: Back row: Leora, Bob, Nancy; Middle Row: Trudy, Ralph; Front: Sherri, Leslie
2:57 Ron, Bob, Ralph
3:01 Standing: Sherri, Leslie, Leora, Jay; Seated Trudy, Ralph
3:04 Standing: Jay, Leora, Trudy, Sherri, Leslie;  Recovering from Heart surgery: Ralph
3:08 Bob, Ralph, Ron
3:13 Bob, Nancy, Trudy, Ralph, Ron, Alice
3:17 Jay, Leora, Ralph, Trudy, Sherri, Leslie
3:21 Jay in the background; Ralph and Bob
3:29 L to R around table: Leslie, Ralph, Trudy, Jay, Leora, Sherri
3:33 Standing: Sherri, Leslie, Leora, Jay;  Seated:Trudy and Ralph
3:38 Leora, Leslie, Trudy, Ralph in sweaters we’ve all had for about 40 years
3:50 Hestia and Ralph having a conversation
3:58 Sherri, Leslie, Trudy, and Ralph at the memory care facility where Ralph had lived since November of 2017
4:02 Ralph getting a visit from Hestia and Trudy (2/28/2020)
4:05 Ralph and Leora (2/16/2020)
4:10 Last documented hug and kiss. . .  The memory care facility lockdown hoping to avoid the spread of COVID-19 happened just a few weeks after this.  Alas, the lockdown was not enough to stop the spread of the virus.

And, finally, this is the obituary that also appears on the Fischer Funeral website: 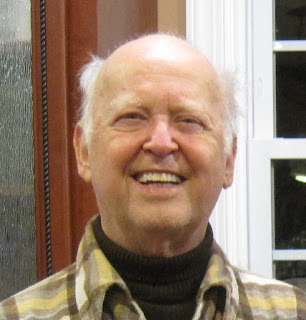 Ralph Lawrence Gregory, age 84, of Saginaw, passed away Sunday, April 12, 2020, at Covenant HealthCare from complications due to Covid-19.
The son of Leonard Joseph and Tillie Gregory, Ralph was born on September 7, 1935, in Detroit, Michigan.
Ralph was a devoted husband, first and foremost, and all of his hobbies complemented Trudy’s.  For example, he liked to build things and she liked to grow cacti, so he built a greenhouse for her.  He loved to photograph, so took pictures of all of her plants as well as family portraits and vacation photos.  He had a great sense of humor that made the whole family laugh.
Ralph graduated from Utica High School in 1953.  He finished his bachelor’s degree in Chemistry at the University of Michigan after his January 20, 1957 marriage to Trudy, and then supported her, and subsequently, two kids, while Trudy went to medical school.  After she became a physician, and was secure in a job, Ralph went back to school and, after only three years, earned his PhD in Chemistry, at Wayne State University.  The research prompted him to create a darkroom at home where he became adept at developing micrographs and photographs (well before the time of digital photos!), and there-after he became the family photographer.
Ralph’s career was predominantly working at Ford Paint and Vinyl Plant where he developed various materials/fabrics and bonded materials for the interiors and exteriors of vehicles.  He worked there until 1991, after 32 years.  In 1993, he moved on to TV production where he and Trudy produced 12 episodes of Bloomtime and a program describing the work of Master Gardeners.
As they were both retired, they figured they’d spend more time on their farm. There they planted a chestnut orchard in 2003, at the beginning of the chestnut industry in Michigan and wound up in the chestnut business!  It produced hundreds of pounds of chestnuts yearly, which they picked, processed, and sold, until 2013.  Following serious health issues, they moved to Saginaw to live closer to their son and daughter-in-law.
Ralph’s hobbies and talents were numerous: building furniture, model airplanes, cars, and ships; stamp and coin collecting; baking and cooking; playing chess; swimming, boating, shooting; photography; doing major landscaping, including a waterfall and pond at the Romeo home with in-situ boulders. In 1979, he built his own computer from a kit which now resides in the Henry Ford Museum in Dearborn, MI.  Ralph wrote his own programs, using one to produce Macomb Audubon’s Earthstar newsletter, of which he was the editor for nine years.  He seemed to know how to maintain and fix anything and everything.  A real Whiz-kid, even in his later years, and all with his punster humor.
Ralph is survived by his beloved wife, Gertrude “Trudy” Gregory; dear children, Leslie (Sherri) Gregory and Leora (Jay Avery) Gregory; brothers, Leonard Ronald “Ronnie” Gregory and Robert (Nancy) Gregory, and several nieces and nephews.
He was preceded in death by his sister, Beatrice Milne, and his parents.
Out of concern for the health and well-being of those family and friends who wish to pay their respects and celebrate a life well-lived, Ralph’s family plans to hold a memorial service at a later date to be announced.   Meanwhile, all are encouraged to leave a tribute and/or your favorite photo by going to this page. In lieu of flowers, please consider giving donations in Ralph’s memory to The Nature Conservancy (https://nature.org), Physicians Committee for Responsible Medicine (https://www.pcrm.org), or Action on Smoking and Health (https://ash.org/).
Dad was cremated.  The burial of the urn will take place at a future date.
We are truly thankful for the wonderful and courageous doctors, nurses, and aides who took care of Ralph.  Their care was thoughtful, and extraordinary, with numerous video calls that allowed us some semblance of closeness, without actually being in the room.
To express your condolences, or add to the photo collection, please visit www.fischerfuneral.com, or go directly to my Dad's page.
May your fond memories be many,
leora

I read it all with great interest. Thanks for posting. Thinking of you and all the family.

Lenora,
I am so sorry first to hear and please know I am thinking of you. This is just wonderful and I really think I know your Dad through your writings. Thank you for sharing this,
Again my sympathies for you and your family.
Ginny

Leora, when I posted my question of "does someone know someone who has gotten C-19" I certainly never thought to get a response from Jay to tell me your dad has passed away. My heart breaks for you but as your friends commented, the story of your father made him more real to those like me who obviously had never met him. So sad and so sobering at the same time. thinking of you and your family!

Leora, thank you for sharing this. I lost my Mom on April 19th last year, and it still catches me off guard that she is not here. Last week was the anniversary of her death and it was tough. I definitely would have liked your Dad. Sorry that this had to happen to you and your family.

Thank you, Pat, Ginny, Terrie, and Unknown! Unknown - I'm sorry about your mother, but I know not where to direct my sorrow! Again, thank you all - I appreciate the comments - leora